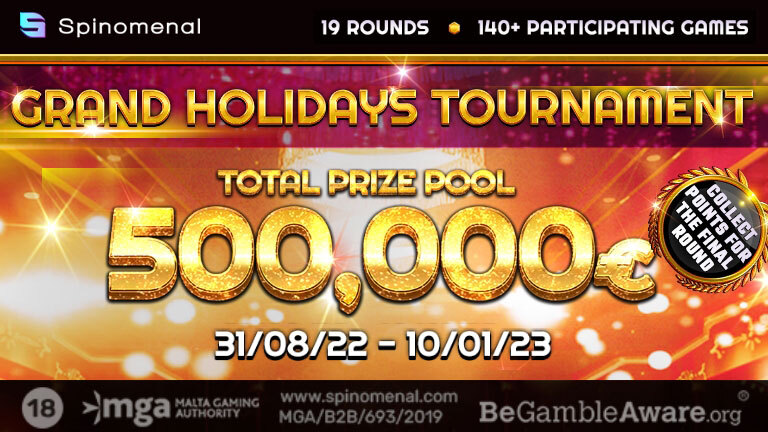 How to win the Grand Holidays Tournament:

Each win rewards the Player with a score based on the win multiplier (for example, if you waged 1 EUR and won 10 EUR, you will be rewarded  with 10 points). The more points a Player collects, the higher the Player’s position is on the tournament leaderboard, which shall include all Players from the platforms participating in the Tournament (the “Leaderboard”).   The Participating Games and number of winning Players sharing the prize pool in each round shall be specified in the Player toolbar.

➢ 10% of the score each Player gains during each Tournament round will be collected as credit points and added to the Player’s score in the final round (Round 19). ➢ Each Player’s rank in the Leaderboard for each round will appear once they reach the qualifying score, as displayed on the Players’ toolbar.

➢ The Tournament is available during real-money play only.

➢ No additional deposits or costs by Players are required to participate in the Tournament.

➢ Participating Operators shall be solely responsible for any and all claims Players might have in connection with the Tournament, including but not limited to the payment of the pool prizes within 72 hours from acceptance of the Tournament results sent by Spinomenal.

➢ All material prizes may be paid in a money equivalent.

➢ Malfunctions and errors may void all play and pays.

➢ If two or more Players have the same number of points at the end of each round,  the Player who reached the points first will be ranked higher.

➢ Prizes for Players playing the Games with Cryptocurrencies will be displayed in EUR. Participating Operators will disburse prizes in accordance with their payment terms.

➢ Only finished spins will qualify for the Leaderboard.

➢ Wins from free spins awarded to the Player by the participating Operator will not qualify in the  Tournament towards placement on the Leaderboard.

➢ The rules, terms, and conditions of the tournament are subject to all applicable laws and can be changed at any time upon prior written notice to Players  participating in the Tournament. Players’ continued participation in the Tournament following such notice shall constitute its acceptance of such changes. The Operator together with its partners reserves the right to stop the Tournament at any time for an indefinite period without paying the prizes.