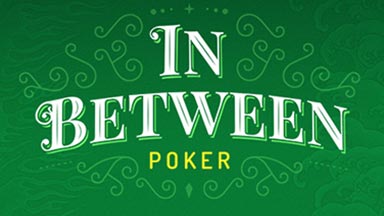 This video poker game In-Between is not as much popular at casinos as the other online games. However, it is often played in home parties and gatherings as an entertainment and while taking a break from boring parties.

How to Play In Between Poker?

To play In Between, all you need is a deck of cards and money to place the bets. Players of this card game chips in the same amount of money to the pot. Within the game, the pot becomes the maximum amount a player can bet each turn.

Then a player from the group or another person needs to shuffle the deck of cards thoroughly. After that, he or she will deal two cards facing up to the player on the dealer's left. Then that player needs to decide if the next card will have a value which is in-between the two cards.

And gradually the turns go on until the pot is completely depleted. Players can end the game there or they can chip in again to begin a new round.

Objectives of In Between Poker:

The sole objective of playing In Between is to be the player with the most chips at the end of the game.