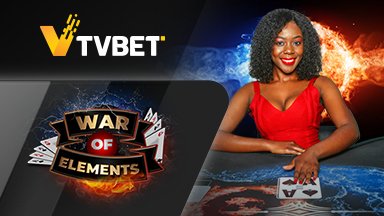 War of Elements is a simple and fast card game by TVBET where players are allowed to bet on several options. This betting feature makes the game even more attractive and profitable for players across the globe. Besides, since it is a fast live game, each round takes no longer than 1 minute. The most surprising thing is there are no breaks between the rounds, which allows players to place bets almost continuously.

How to Play TVBET War of Elements?

War of Elements is a fast card game by TVBET and it takes place in LIVE mode around the clock. The game uses one simple deck of 52 cards. At first, the player gets the card and then, after a short period, the dealer gets a card. Once this process ends, the cards on the table get compared from where the winner is determined.

The result of this card game might be on the dealer’s side or the player’s. Both of them can get the victory, as well as it can be a draw.

Betting options of this game include the result, color, suit, the exact value of the next card, over/under, a figure card, or a non-figure card. However, players are also allowed to bet on both current and future events before each current card dealing.