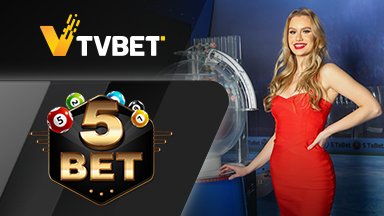 Unlike 7Bet, here the lottery balls are numbered from 1 to 36. The colors of the balls also differ from 7Bet. In 5Bet the balls are painted in four colors – blue, green, red, and yellow. Hence, creating various combinations using both the numbers and the colors is possible in this game.

This game from TVBET also provides several betting options to the players. The options include:

How to Play TVBET 5Bet?

5Bet is similar to one of the other released live casino games by TVBET called 7Bet. It is also a popular and fast live game where 5 out of 36 numbered balls are selected randomly by the lottery machine. However, this variant by TVBET adds another new feature where the player can bet on his favorite combinations of numbers and colors for several draws in advance.

The aforementioned feature is included under the terms of an accumulator or single. During the mixing, the dealer of the game selects 5 lucky lottery balls randomly out of the 36 numbers. These numbers are later shown in the resulting tube.