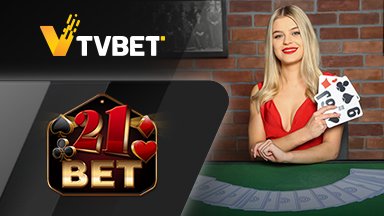 21Bet is one of the most famous and popular card games in the world likewise the other releases by TVBET. It uses one standard 52-card deck for the gameplay. The dealer deals the cards but after the first distribution, if the player fails to collect the “Blackjack”, the second round begins.

The second round starts with dealing cards to the player until he collects from 17 to 21 points, or takes over. If the player has collected 17-21 points, then the presenter deals cards to the dealer’s position according to the same algorithm. When busting, the opposite side wins.

How to Play TVBET 21Bet?

The game starts with the same goal as the other TVBET games; by guessing which side will get the number of points closest to 21. The game allows every player to bet on various options such as:

Along with the rules, the table in the game also got updated. The latest edition avails parallel sections for both the player and the dealer in the table. The middle part of the table holds each one’s cards closer to the specific person.

After the changes, the game has become more illustrative, standardized, and understandable for each online gambler.