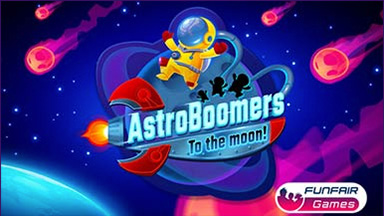 AstroBoomers to the Moon Overview:

This is an online crash game that is ideal for those who want to try innovative online casino games. The game has an interstellar theme and that makes the game even more fun. Unlike the other games that let the players use one bet per turn, this game allows them to place three bets.

If we look at the visual point of view, we will find it a modern cartoony game that has quite a few great animations within. Such as animated space rockets, astronauts, and so much more. The two background images of this game depict a mysterious planet in outer space.

Players of this game would get thrilled by just listening to exciting music and sound effects. Another important thing is that players can select the volatility of this release. Still an attractive game without any special features and players can also play it through their mobile phones or tablets.

How to Play AstroBoomers to the Moon?

Players’ main objective in this game is to jump off the space rocket before it gets destroyed. To start the game, a player needs to place one, two, or three bets. The game has a countdown for allowing multiple players to wager 15 seconds before the rocket is launched.

The game will then show three-bet fields along with the total amount of wager the player can use on all three fields. The lowest amount of wager would also be shown in the fields themselves.

The main screen of the game contains four other buttons, among which lies the “Re-bet” button. This one will allow the players to place the same bets as those used in the previous turn. The main screen also contains a chat icon in the upper-right corner of the screen.

Players can use the chat button to communicate with the other players. The speaker icon available on the screen regulates the music. Players who don’t know how to play this game can navigate through the three lines in the lower-left corner of the screen. This option will help them to know the game rules. Players can also reach the settings section from this option.